In this article, we will discuss how Copenhagen managed to digitalize its parking payments, and save millions per year in maintenance costs. The key was adopting a free competition model with several mobile apps in operation. This proved a successful method for both citizens and administration. In order to understand exactly what happened and what the underlying reasons were, we are going to go back in time and analyze the 15-year struggle that Copenhagen went through. If you are in charge of parking arrangements in your city, this read will definitely be worth your time.

The chronological story of Copenhagen’s struggle to find a good and cost-effective way to handle parking starts in 2002.

Copenhagen is the capital and largest city of Denmark, with more than a million people in the metropolitan area. Street parking generates around 100 million euros in revenue to the city annually through 1600 multi-space parking meters.

During the IT bubble in the early 2000s, the city decided to implement an SMS and IVR payment solution, the goal of which was to reduce the amount of parking meters in the streets. The city went through a heavy RFP process and picked IT giant Siemens to be in charge of executing the mobile payment solution process. It’s not uncommon for cities to rely on big, established players, as it gives them a sense of security and stability. During the subsequent 10 years, the city tried to get the mobile solution to take off by promoting it regularly.

It was an ambitious project where all the pieces seemed to be in place:

Nevertheless, the project failed. In 2010, only 10% of the total revenue came from the mobile payment system, and the city had to invest in new, even more expensive parking meters.

10 years later: Mobile payment failed because users didn’t like it

After a 10-year struggle, the city of Copenhagen realized it would have to come up with a new strategy. The idea of a mobile solution still lived on, as the benefits and the possible cost-reductions were easy to understand.

The most important discoveries from the failed project were the following:

By the beginning of the 2010s, smartphones were everywhere, and the city started seeing apps of all kinds emerging. People started using apps to hail cabs, to do their banking, to order food and so forth. The reason for this was simple: smartphones allowed people to get their hands on easy-to-use apps that were truly ten times better than previous solutions. Due to the fast-paced nature of the IT industry, the city now tried a different approach.

As a result, suddenly, there was ample choice for users and a fierce competition between the different parking apps, and citizens loved it because it made parking so much easier than before.

The graph below shows the Copenhagen mobile parking growth between 2012 – 2016: 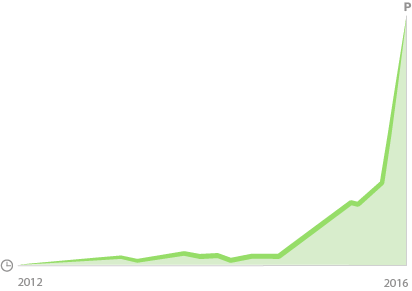 After a long and rocky road, the city finally got it right. In just 2 years, the mobile payment usage rates climbed over 50%, and they keep on climbing. This allowed the city to remove parking meters and increase customer satisfaction, as well as revenue. The city installed signage instead of parking meters, telling people to pay by phone, by picking one of the payment providers listed on the sign.

The city is no longer dependent on one single service provider, which allows it to reduce risk (if one provider goes down, there are still others left). With this simple change in strategy, the city ended up with a very safe and risk-free end result, but at the same time allowed innovation to happen and user feedback to guide the process.

In Copenhagen, the mobile parking revolution has started.

These cookies allow us to count visits and traffic sources so we can measure and improve the performance of our site. They help us to know which pages are the most and least popular and see how visitors move around the site.